One of the key elements of Pennsylvania’s workers’ compensation is law is wage-loss benefits. These benefits are meant to indemnify an injured worker against the loss of their weekly paycheck while recovering from a job-related injury. Unfortunately, wage-loss benefits are not a 100 percent replacement. Instead, the actual benefit amounts are subject to certain legal minimum and maximum ranges that change each year.

What Are the Workers’ Compensation Rates for 2021?

The actual compensation rate depends on the injured workers’ average weekly wage prior to their accident or occupational illness. There are essentially three tiers for determining compensation: 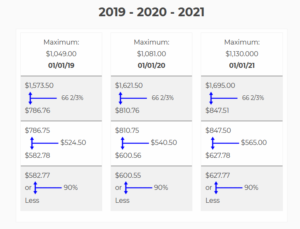 It is important to note that the applicable workers’ compensation rates are based on when the actual injury or occupational illness occurred. In other words, the rate schedule described above only covers workers’ compensation claims arising on or after January 1, 2021. If you were injured last year, your claim would still be subject to the rate schedule in effect for 2020.

Workers’ compensation law is often confusing to people who have never dealt with the system before. If you need guidance or legal representation in connection with a claim, it is best to speak with a qualified Wilkes Barre workers’ compensation lawyer. Contact the Figured Law Firm today at 570-954-9299 to schedule a consultation.